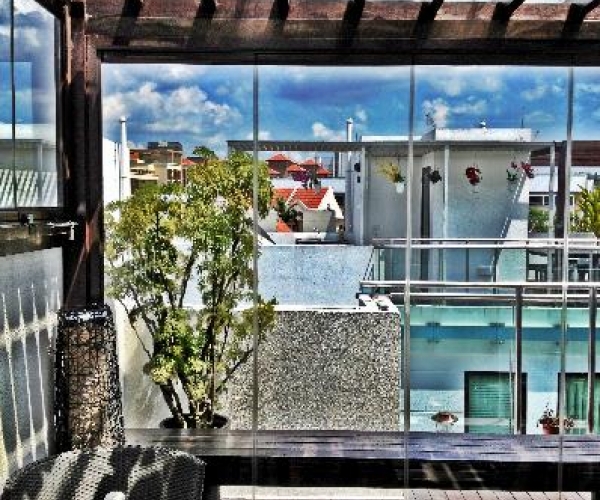 Sunseap started as a manufacturer in the 1980s and 1990s. They were vulnerable to the rise and fall of solar panel prices, which affected their total production costs. Then when Chinese manufacturers set the cost of solar panels to be very low, Sunseap decided to relook their business model. Singapore was a good environment for them to begin solar leasing because the cost of electricity is not subsidised, thus the lower cost of solar leasing would be attractive. Regulations in Singapore are also fair and not trended towards any particular source of energy, thus solar leasing stood a good chance as an alternative energy source.

Before Sunseap went into solar leasing, they saw how some of their first customers paid so much money for solar systems but did not know how to maintain it themselves. “Because the solar power system is on a roof, and you don’t see it, you don’t really notice it”, said Frank. So their customers’ systems would become white elephants because they paid so much money upfront, but just left their systems there. Thus they felt solar leasing was a better, win-win situation for their customers and for Sunseap themselves. This is because in solar leasing, they install their solar panels on their customers’ roofs, and then charge customers for the solar energy they use, not for the entire system. The solar system still belongs to Sunseap, and with their team of experts they are able to maintain the system properly. Frank explains that they “are still selling solar energy, but the legal structure is packaged around a lease arrangement”. With economies of scale, they are able to earn the revenue to cover the cost of installing and maintaining their systems. Sunseap would sell solar energy without having to apply for a licence to become a retailer.

Because the solar panels installed on their customers roofs belong to them, Frank explains that he and his team are “kept on their toes” to get their revenue back while maintaining their panels on their customers’ roofs. Everyone is happy in this situation because Sunseap’s clients are able to pay for solar power to fuel a portion of their energy demand at a rate lower than traditional electricity costs, thus generating savings. In an example that Frank gave, one of his customers was only paying about 22-23 cents per kWh, compared to their regular 25 cents per kWh. And Sunseap is able to get a constant, stable source of revenue, compare to when they were manufacturing panels and were subject to the rise and fall of Chinese manufactured solar panels. Frank says that his customers “want us to generate more solar power so that they can get more savings, and we also want to generate more so that we can get more revenue”. This enables both parties to benefit.

Frank believes that their solar leasing model will work in Singapore because in the next 10-20 years, the price of power should increase. In Singapore specifically, hydro or wind power doesn’t have a big enough capacity to bring energy costs down. Thus these factors make solar leasing look more attractive. Frank also says “The price of the panels is just a portion of the entire solar power system. The whole system is still very expensive, and there are some people who are still unwilling to invest”. This is especially true for smaller companies who do not have millions in their banks. Frank is optimistic about the growth of solar leasing. Minister S Iswaran also announced that the government plans to expand their capacity for solar to 350MW by 2020, which gives greater room for the exponential growth of solar leasing.

Moving forward, Sunseap would like to move towards leasing for smaller systems such as for warehouses, schools, and even landed residential properties. “Smaller systems can accommodate for 10-20kW, and to do leasing for such a small system is a stretch for us now, but in the coming one year we should be able to do it”, says Frank. Sunseap is working with an online platform called Solar PV Exchange which is able to provide instant quotations to clients. Clients use Google Maps to track their property, then mark out the area to install the PV system, and the online platform generates a quotation. With this platform they are able to do small scale leasing, and that is how they wish to grow the leasing business.

Frank shared that many of his customers are very surprised at how affordable solar energy is. “The media has conditioned people to believe that solar is expensive [and will only become cheaper in the future]. But we are already there”. He has to convince customers that there is no catch to their leasing agreement and no hidden costs. As more projects are taken up, more people will become aware about solar leasing as an extremely viable option for renewable energy. Even as solar technology develops further, for example if there are solar panels that can absorb two or three times the amount of sunlight than it does today, or if more efficient solar systems are developed, this brings about a further boost to using solar power that benefits everyone, and we can look forward to greater things ahead.